Integration falls under the branch of mathematics called calculus and is the inverse operation to differentiation. It is used to calculate the area under a curve, an example of this is calculating the distance travelled in a car if you speed over your journey can be plotted on a graph, then the distance that you have travelled is the area under the curve. This is called the integral, and is expressed as the integral of the car's velocity/speed with respect to time, or $distance = \int{v.dt}$, where $v$ is the car's velocity/speed, and $t$ is time. 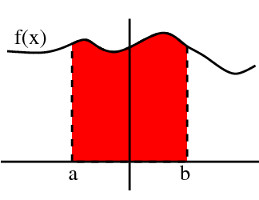